DO you know how to play the opening? || Wednesday column 1

Hello everyone! This is IM Srinath here and I'll be writing about the 'general rules of openings' every Wednesday! This series of articles will help beginners, and intermediate players understand the foundational strategies for good opening play.

Here's a quick overview about me before we begin:

Chess is war over the board. The object is to crush the opponent's mind

Chess is a battle between two brains. It is a competition between two individuals which is no less gruesome than a boxing match; only cerebral in nature, not physical. Like two armies battling out each other, the White and Black pieces trade blows and dance around the board at the behest of their able commander, you.

Strategy in chess is a general plan, an idea that a player enforces upon his pieces during the game. A good chess player plays his moves according to a good strategy which helps him make good moves. Obviously, when you play chess, if your strategy is better than your opponent’s, you will have an upper hand in the game. Most probably, you will win. If you want to play better chess, you need a good strategy because it will help you win more games.

In this article, our focus shall be on studying opening strategy, following which you will be given a treat of three short games highlighting our opening strategy in action. A sound opening strategy will ensure that you have good squares for your pieces and a safe castle for your king to live. Let me show you the basic opening strategy which will pay you immediate dividends. Application of this strategy is very important because it will improve your chess and help you win more games.

Here are the first three fundamentals that we are going to cover in this article:

• Control the centre.
• Develop all your pieces quickly.
• Keep your King safe, usually by castling.

Imagine yourself standing on a football pitch. Come to the centre of the pitch, known as the midfield. You will realize that the goalposts in both the opposing directions are equidistant from the centre, the midfield. This shows that the side dominating the centre of the pitch will have more chances to make a thrust towards the opposing side’s goalpost, allowing the strikers to score goals.

I will show you this strategy in action on a chessboard, with the example of three illustrative games! Follow along with me. Get yourself a chess set, or use the Game Viewer to see the games. 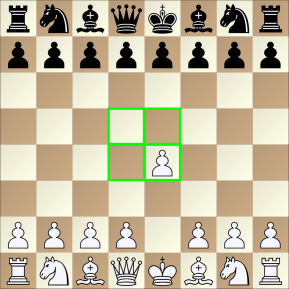 Black does not make any attempt to establish a pawn on the four central squares. 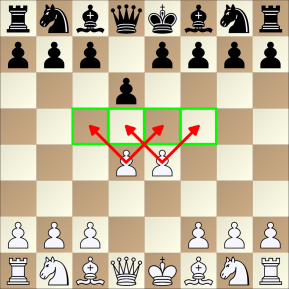 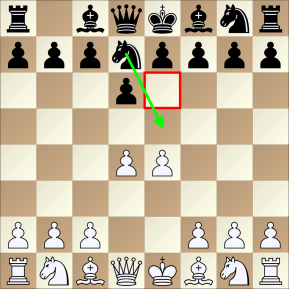 This move controls e5 square. However, it weakens e6 square as it blocks the Bishop 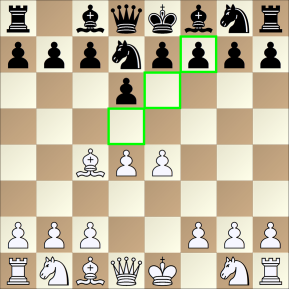 Points you must remember: 1. When you have better centre like in this game, you have more share of the space on the chessboard. This allows you to develop your pieces quickly with freedom.

2. When you control one particualar square in the centre, you control a set of squares of the same colour along with it. In this game, White's Bishop by focusing on d5 also controls e6 and f7 squares, all being light squares.

Although ...g6 prepares Bg7, this move does nothing to control the centre directly.

(3... Ngf6 is the correct move. Develop towards the center)

Developing the piece, again focusing on the central squares d4 and e5. 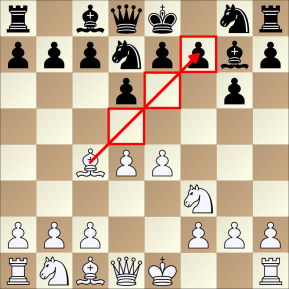 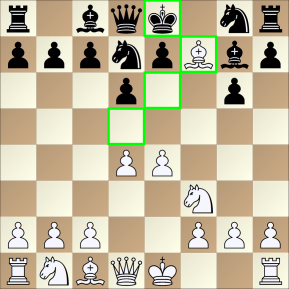 White dominates the centre and makes the thrust forward! The light squares were too weak, White figures out a way to crash through and attack Black King. 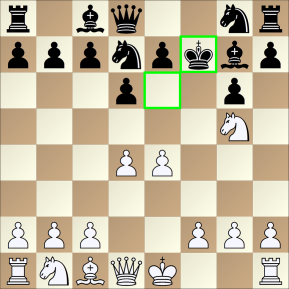 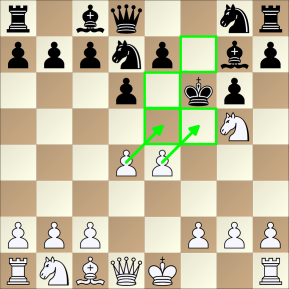 ( If6... Kf8 ( If6... Ke8 7.Ne6 trapping the Queen! Again, this is because of the weak e6 square which White controlled and Black failed to control.) 7.Ne6+ resulting in a nasty Knight fork. You must notice that this tactic was possible because e6 square a light square was weakened by Black with ...Nd7) 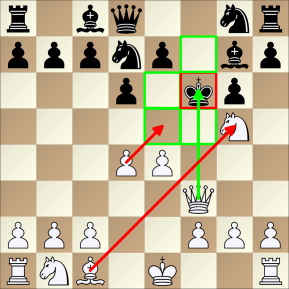 This move is known as the Philidor's Defence. It allows the c8 Bishop to develop, however, makes the f8 Bishop a bit unhappy. 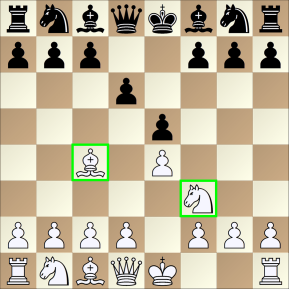 So White has managed to develop 2 pieces on the Board.

Black has managed to develop a piece. Do you think ...Bg4 controls the centre? The answer is yes as it restrains the White Knight by pinning it. This is called 'lead in development'.

Please note that White is developing his pieces towards the centre. White has 3 pieces focusing on the centre compared to Black's one which is indirect in nature. This is called 'lead in development'. 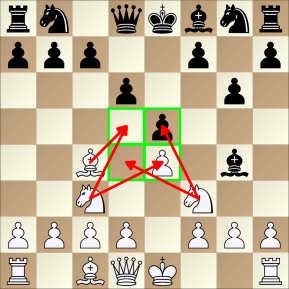 Black makes a move which does not control the centre and does not develop any piece. Punishment is swift. 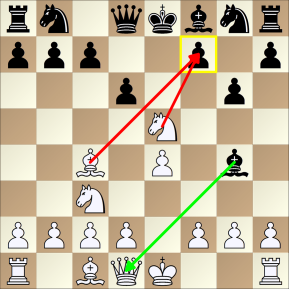 sacrificing the Queen! This idea is famous around the world as Legal's mate. 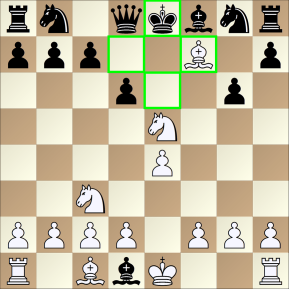 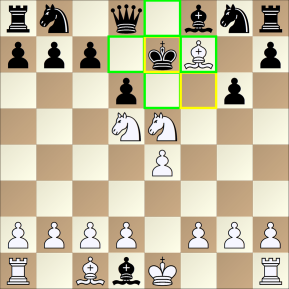 Pretty. This game shows the importance of developing the pieces quickly! White has 3 pieces swarming a black king like bees.

Imagine you are the King, fighting a battle to save your Kingdom. What do you think, will you be the first one to move forward and begin the fight? NO! You will be tucked inside safety of your castle, away from all the blood and fighting, biding you time! What will happen if you don’t tuck away your King to safety within a Castle?

White sacrifices a pawn to get a slight lead in development. 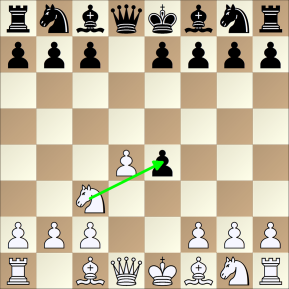 This is not the correct way to play the opening. Do not bring out the Queen early! White sacrifices another pawn with the hope of gaining more time by attacking the Queen with tempo if Black elects to play 5...Qxd4. Nevertheless, you should almost always develop the Minor pieces first.

This is not the correct way to play the opening. Do not bring out the Queen early! White sacrifices another pawn with the hope of gaining more time by attacking the Queen with tempo if Black elects to play 5...Qxd4. Nevertheless, you should always develop the Minor pieces first.

Attacking the Black Queen and gaining time. This called 'a move which gains a tempo'. Tempo means an extra move one gets by attacking opponent's pieces and at the same time developing your won piece.

(6... Qg4! attempting to exchange queens is a better option)

This the b2 pawn, brings a Rook to an open file. White has castled while the Balck King is still in the centre.

Black skewers the Queen and Rook. However, the Black King now becomes a victim of delayed development! 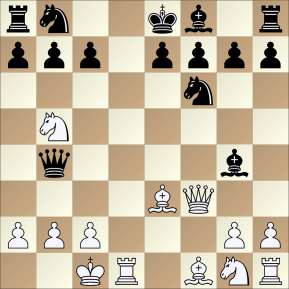 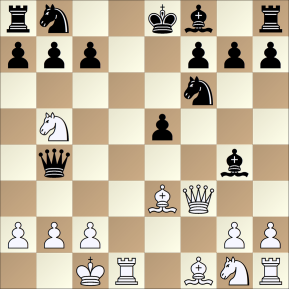 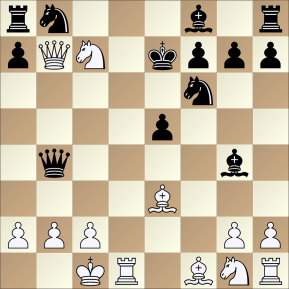 this is what you get when you don't castle to keep your King safe.

Here's a summary of the lessons learnt from the games:

1.Center is the most important thing to fight for in almost all openings - go for it.

2.Develop pieces rapidly - towards the centre.  More players on the centre of the field!

3. King safety: Tuck your king safely in the castle or, even the extra material can't help save the game.  We see the difference between a castled king and the uncastled king in the Bartsch-Jenner game very clearly.

That's it for today!

Do share your questions, thoughts or doubts in the comment section below! I look forward to reading it. Goodluck!

Stay tuned until next Wednesday to learn more about how to apply the golden rules of openings and how things can go wrong!

3
DO you know how to play the opening? || Rapid Development
Hello everyone! this is IM Srinath, and I am back again with the basics of opening strategy.  In the second article of this series published last Wednesday, you lear...
by yodhaa on Dec 3, 2014

3
DO you know how to play the opening? || King Safety
In the previous two Wednesday columns you had learnt the importance of controlling the centre and developing your pieces quickly towards it. It’s time we move on to...
by yodhaa on Nov 19, 2014

2
Controlling the Center | Opening strategy
Hi everyone! this is IM Srinath, and I am back again with the basics of opening strategy.In our introductory column last Wednesday, you had learnt the three main strategi...

yodhaa 07:57 - 18 Nov 2014
Hello everyone! Thank you very much! I would also be pleased if you can give feedbacks on my other articles as well which you can find by clicking on my profile