On October 20th, the prestigious World Junior Chess Championships concluded in Pune, India. The World Juniors, as it's often called, always draws the best U20 players from all over the world and this year had 60 titled players, 18 of whom are GMs, from 60 countries.

This long and tough event brings the best out of these young players because almost every round is hard-fought against the best juniors of their respective country. And it is well known that many of the world's current top players have won or competed here in their early years.

In this edition of WWR, I will feature two games of the winner of the Open Section: Lu Shanglei from China. As a bonus, I also included the winner's notable win in the World Blitz Championship against a very strong & solid player (check the sub-game in the 1st game to find out who!).

The first game I'd like to feature occurred in the critical round 10 in which the Lu faced one of the few leaders and #1 seed in the Open section, Vladimir Fedoseev of Russia. 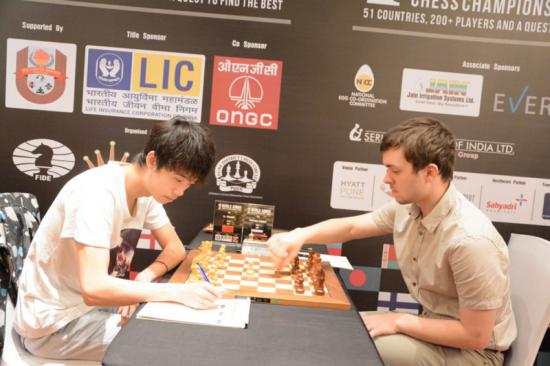 Lu Shanglei uses his favorite Vienna Variation, which he also used to beat a very strong & solid player in the World Blitz Championship.

A normal, quiet position has arisen from the opening in which both sides have equal chances. Now contact begins to take place between the two armies:

now both sides try to complete the development of their pieces.

this way of arranging Black's pieces may seem attractive, but is weak as it allows White exploit some of Black's misplaced pieces

The beginning of a cunning tactical idea 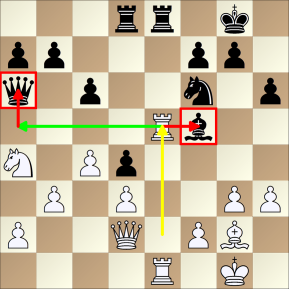 The point, White creates a double threat on capturing the B and trapping the Q. Black cannot avoid his queen from getting trapped without losing too much material. 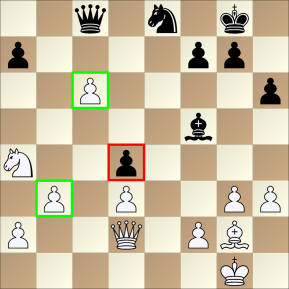 and the rest was a display of dominating Chinese technique.

killing Black's last counterplay by force before promoting another queen, so Black resigned.

This next game occurred in the final round in which Shanglei displayed more grit & a strong will to win! 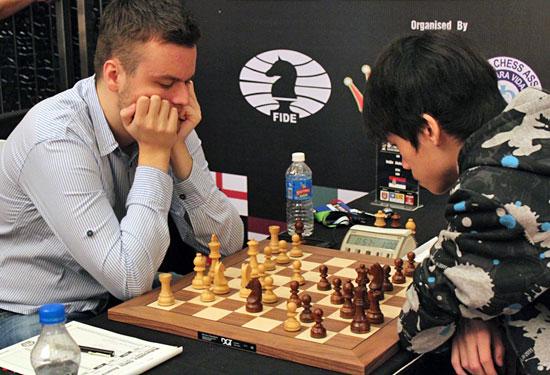 Black has come out from the opening slightly worse due to lack of space and worse piece placement, but he subsequently outmaneuvers his opponent, gradually imrpoving his chances in a complicated position

Shanglei shows his intention by increasing pressure on White's center.

a nice intermediate move which may have surprised White

18.Qc2? a mistake, because it gives Black a strong intiative on the kingside.

now Black opens up the game in his favor (enemy king in the middle of the board--remember First Element of Good Positional Play?) and energetically develops his initiative. 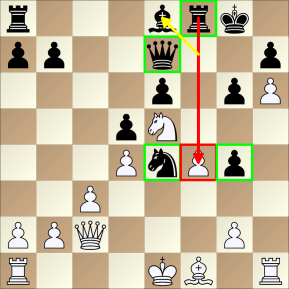 What do I mean by developing an intiative? Constantly creating threats and putting the enemy under pressure so as not to give him time to castle or develop.

Black invades the enemy camp & brings a piece closer to the enemy king, while he keeps making threats 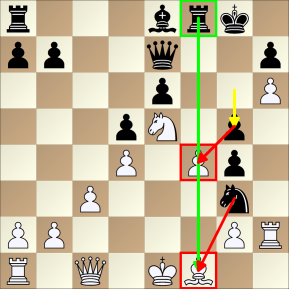 Do you feel the pressure increasing? I'm definitely sure White did!! 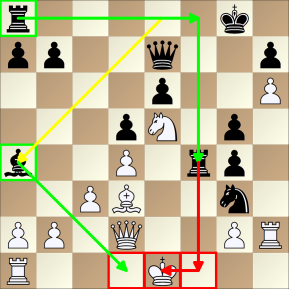 A great attacking move by Shanglei. He prevents White from running away to the queenside while allowing his comrade on a8 to join final battle! 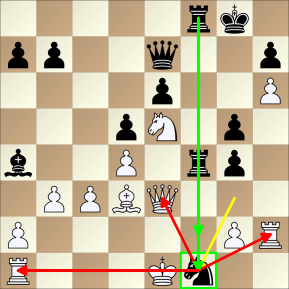 the queen joins too, now everyone's at the party!

What a way to win a World Junior Championship! From professional experience and observation, it's always challenging to win the last round or even to just play for some players due to the pressure and fatigue weighing over. But this young man from China showed that grit and fighting spirit (in addition to training & experience) can overcome higher-rated opposition and external pressures during play. 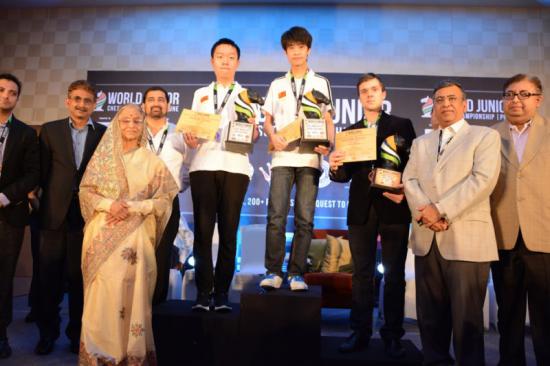 some photos by Amruta Mokal

2
Who Won Recently? Yuriy Kuzubov
Hi everyone! I'm back with a new series dedicated to strong tournament winners. Every month I will select one or two tournaments and feature an instructive game by the Ch...
by Inopov on Sep 25, 2014

2
Who Won Recently? Fabulous Fabiano!
At the beginning of this month, the 2014 Sinquefield Cup, the world's strongest closed tournament in history was held in St. Louis, Missouri, USA. In this double-round ro...
by Inopov on Oct 20, 2014

2
Who Won Recently? Wesley won So much!
On October 9th-13th, the most glamorous and arguably the strongest high-stake chess open in the world took place in Las Vegas, Nevada, USA. The Millionaire Chess(MC) Open...