Magnus Carlsen can become the first player to win Tata Steel Chess six times. It would be a spectacular record. Yet, tournament director Jeroen van den Berg secretly dreams of another winner, he reveiled at the opening ceremony on Friday. "I don't know if it is politically correct to say this, but I hope Anish Giri will win."

Jeroen van den Berg is a busy man. 'His' Tata Steel Chess Tournament is about to start. For Chessity, the tournament director could spare some time for an interview. 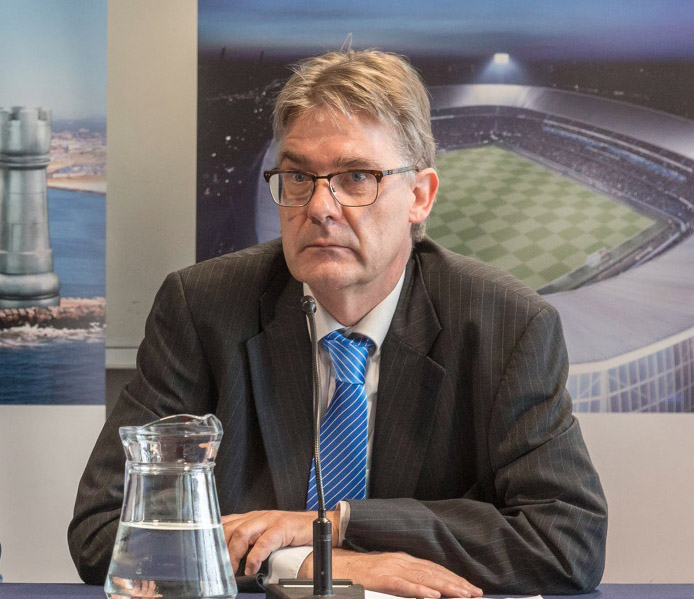 "I sleep well, but the start of a tournament is never relaxed. If we wouldn't feel a healthy dose of tension, we'd be doing something wrong.

This week has been extremely busy. There were all sorts of small changes, I had to supervise the arrangement and layout of the location, and I got many phone calls from journalists. Moreover, due to bad weather in parts of Europe, a lot of flight were delayed, so we needed to reschedule our taxi services. And then there was yesterday's opening ceremony and the opening of the Challengers on Thursday. It's only when all players are seated at the chess boards, that things get more relaxed. That's when I really start enjoying the tournament."

Fortunately, chess players are not as prone to injuries as, for example, tennis players. So they don't pull out at short notice...

"Still, it happens. It could have happened this week. That thought does not make me nervous, however. If something like that happens, I know how to resolve the problem. I always have a back-up plan in my head."

You are the tournament director of Tata Steel Chess. What exactly do you do?

"I am responsible for everthing that has to do with chess. And that is pretty much. Not only has the tournament many participants, there's also the officials and arbiters and there are a lot of journalists. As a director, they are my responsibility.

I work for Tata Steel Chess throughout the year. Of course, there are some quieter times, but adding up it amounts to about six months of fulltime commitment. Immediately after the end of this year's edition, we'll start planning next year's tournament. In February, there'll be a new shortlist of chess players we want to invite to Tata Steel Chess 2018. And then I start hunting."

"It starts with me contacting players. I often travel to tournaments in which they participate, hoping to set up a meeting. Is it difficult to persuade top players to come and play in Wijk aan Zee? No, not really. Tata Steel Chess is a popular tournament. Most players are eager to come, so the hardest part is making the right choices. The past few years, however, attracting players has become slightly more difficult. In the same period, there's a tournament in Gibraltar. Some players prefer to play there.

If a player does not want to come to Wijk aan Zee, I stop chasing him or her. I simply move over to the next player on my list. It is important to stay on good terms, because there is always a next tournament."

A complete shortlist in February doens't allow you to take into consideration what happens in the 11 months leading up to the tournament. Isn't that difficult?

"I try to take player development into consideration. I alway keep a keen eye on the lower rated players. If I suspect a player is going to make huge progress, I try to book them. It doesn't always work out, but on the whole I am pretty good at predicting chess players' development."

You have a lot of experience, don't you?

"Yes, that's right. I was appointed tournament director in 1999, but I have been involved with the tournament since many years before that. Looking at chess through Tata Steel Chess glasses has become second nature.

My predecessor, the late Piet Zwart, was the tournament director for 45 years. I belief I am only the third director in the history of the tournament. Our organization has changed quite a bit during the last years, so continuity is a good thing. The chess world is not an easy world if you are not familiar with it. You have to know the people and build trust. And then you must keep this trust. Traditions and long habits help to establish that."

What are your expectations for this year's tournament?

"My expectations are very high. Carlsen and Karjakin, who competed for the world title in November, meet again at our tournament. Anish Giri is eager to become the first Dutch winner after Jan Timman in 1985. And then there's Wesley So, who has been in excellent form for much of 2016. I think we'll have a great tournament."

What else are you looking forward to?

"The atmoshere is special. Once all players are in the hall, it feels like a reunion. That is not something we can organize, it just happens. Another great thing is the new Kids Weekend on January 21 and 22, in which we cooperate with Chessity. I think this is a very good addition to our program.

Chess players are getting younger. It's a trend of the past ten, fifteen years. We realized this and decided it was time to organize something special for children, even for kids who cannot play chess yet. We want to increase the popularity of the game. That's why we take the tournament 'On Tour' to Rotterdam and Haarlem and why we added the Kids Weekend. Personnaly, I think this is quite exciting!"

There is champion in everyone. Let talent blossom with Chessity

As part of the official program, Chessity joins the Tata Steel Chess Tournament in Velsen-Noord, Rotterdam, Haarlem and Wijk aan Zee to introduce children to chess. We hope to inspire as many children, parents, chess players, chess coaches and teachers as possible to pick up on chess for children to unlock their potential.

Find out how Chessity helps you with the best online chess learning curriculum or ask us for more information.

0
Chessity for fourth year in a row official partner of Tata Steel Chess
The 80th edition of the Tata Steel Chess Tournament in Wijk aan Zee is on its way, and once more, the tournament organization has teamed up with Chessity. For the&...
by JacquelineW on Jan 5, 2017