It is probably no longer a surprise for you when I tell you it was indeed Vishy Anand who won the 2014 Candidates tournament in Khanty-Mansiysk. The key to his tournament victory can in my view be described in one word: control. Vishy was in control from start to finish, running away early in the tournament with 2,5 out of 3, picking up one more win along the way and already after the penultimate round against Sergey Karjakin having a decisive lead. His play was also very much controlled, not taking excessive risks -draw being no disaster- but striking hard when given the opportunity!

In this blogpost I'd like to go over four key games that greatly helped towards tournament victory. You can play through the games using the gameviewer (see up), by reading the text, or viewing the four videos.

Well begun is halve done is a well known saying that surely applies here! Facing the man he had never beaten before with the white pieces Anand breaks the pattern and beats Levon Aronian in great technical style.

The element of luck is important in an event like this. Here Vishy's preparation was -to put it mildly- modest and I was a bit surprised that Aronian was already in unfamiliar terrirtory. Had he prepared this properly then surely 13...Nf4! 14.Nf3 Nxg2! would have followed. The point is that 15.Kxg2 is met with the amazing 15... a5!! threatening to win the piece back with a5-a4 and, surely not less important preparing a rook lift. Black has terrific compensation, for instance: 16.a4 Ra6! 17.d4 Rg6+ 18.Kh2 Bd6 and White can hardly move! As I said, luck is an important element. If Aronian had prepared this line properly the whole tournament may have taken a completely different turn! As it happened Aronian had to take a huge blow and Anand got of to a flying start.

Another defining moment in the game. White is a pawn up but Black's pieces are excellently placed so it doesn't seem like a 'full' pawn just yet. Instead of sitting on the pawn Anand now transform his advantage in highly instructive fashion! 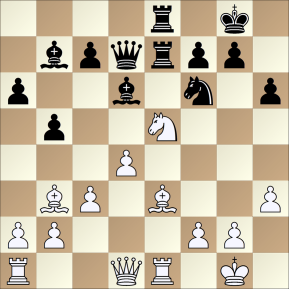 Black has his pawn back but White's bishop-pair garantuees him a slight but stable advantage.

22.Red1 Nf6 ( Taking of one of the bishops with Nc5 23.Bxc5 Rxc5 would generaly be desireable but here it allows 24.Rd7 when White's advantage is clear.) 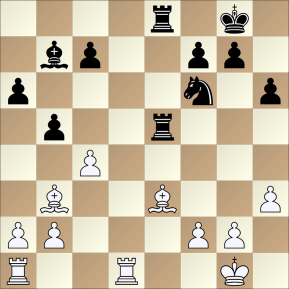 White's advantage is huge and Anand showed superb technique all the way till the end in order to turn in into a point.

A dream start for Vishy obviously! After solidly drawing the second round it was the dynamic Azeri player Shakhriyar Mamedyarov that Anand had to face.

Black can be pretty satisfied with his achievements after the opening but things dont yet look that bleak for White. 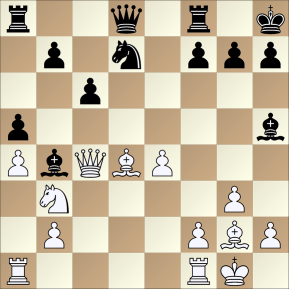 Out of the a2-g8 diagonal so that f7-f6 becomes available. 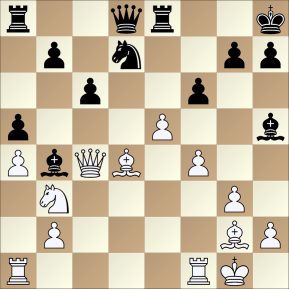 Suddenly the threat of Be2 turns out to be very difficult to meet! 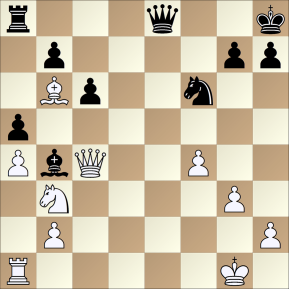 ( Now it all goes very fast, better was 24.Bd4 in order to keep the possibity to take on f6 when needed. Mamedyarov agrees as he retreats his bishop on the next move.)

Too late. The reason I think this was one of those defining moments for Anand this tournament is the way he executes this game; it is Vishy as we used to know him, fast, precise and lethal. 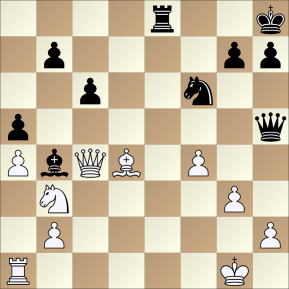 One of my first coaches always said that in order to have a good party you need to invite all your friends over! 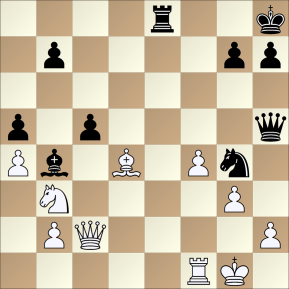 With all White's pieces tied up defending it is no surprise that there is a winning tactical stroke. 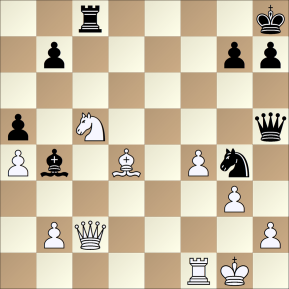 After making this move Mamedyarov decided not to wait for 31...Ne3 but resigned directly. And that is how Vishy got to 2,5 out of 3! In this game we see the old Anand: immediately striking when given the chance. Out of the next 10 games the former World Champion drew 9 and won one more game. That win happened in round 9 against another former World Champion: 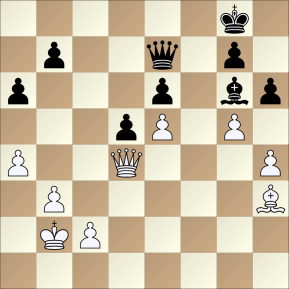 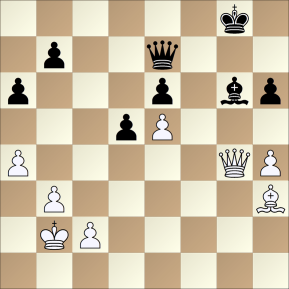 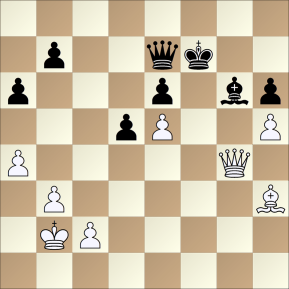 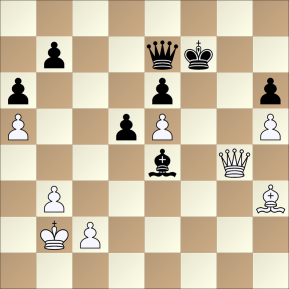 Zugzwang, unable to move queen, king or pawns, bishop moves are all that is left. 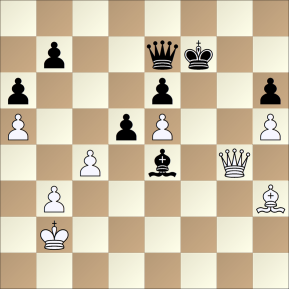 Given White's extra pawn and space advantage the queenendgame is an easy win:

Highly instructive! Because none of the other participants were particularly shining -both Kramnik and Aronian must be very dissapointed with their play and score- +3 proved easily sufficient for a rematch with Magnus Carlsen. The final obstacle was Karjakin who, with a win in round 13, could come within half a point striking distance. It is interesting to note that for Karjakin the tournament was simply not long enough. That may sound strange given it was a 14-round event but after a mediocre 2,5 out of 7 start he bounced back convingly making 5 out of 7 in 2nd leg! 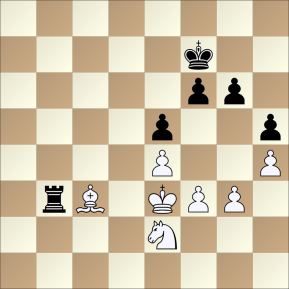 It is clear that Anand is in trouble here. Exactly 100 years ago a famous game took place between Capablanca and Lasker, where the material balance was the same but both sides had only 3 king-side pawns. Lasker managed to defend this position but with 4 pawns Black's task should be considerably more difficult. In general White's ideal is to find a target within Black's pawn structure, attack it with both knight and bishop, take the pawn and liquidate into a winning pawn-endgame. Easier said then done though, especially against a very well defending Anand! 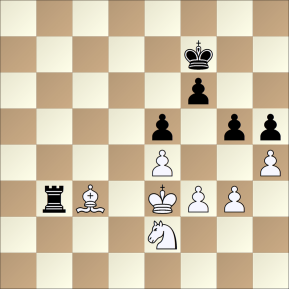 Very important, the natural 1...Ke6 allows White to change the structure in a favourable way. 2.f4! Rb1 (2... exf4+ 3.Nxf4+ Kf7 4.Nd5 shows the strength of white's minor pieces when there are targets within Black's camp.) 3.fxe5 fxe5 and although I am not at all sure White can win here, there is at least a target on e5.)

2.hxg5 ( I think 2.Kd2 was a better chance and when the pawns get exchanged on h4 White has to plans; he can bring his knight to f5, but it is difficult to see how to make progress afterwards, but more chances are offered by striving for the f4-push. The game continuation looks very stong, but allows Black to escape by miracle.)

White has managed to find a target and attacks it twice. Mission completed? 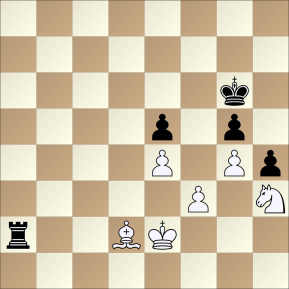 Draw agreed, which means in November we will see a rematch between Carlsen and Anand. Truth be told, I was not expecting Anand to be fighting for the top spots in this event, so perhaps I should be modest now and not give any prediction on the upcoming match. In any case I wish it to be more exciting then the previous match, which was clearly a one man show!

Once the tournament finished, Anand decided to try his luck at something completely unrelated to chess! I leave it to our dear readers to come up with the best caption :)

Check out our Game Viewer (see up, blue button) in order to play through the games analysed above! A smaller sample you find underneath.

0
Carlsen-Anand: Game 1 and 2
The long awaited match has started! In the upcoming weeks IM Robert Ris and yours truly will be giving our view on the World Championship match between reigning champ Mag...
by Erwin on May 2, 2014

2
Magnus strikes again: Part 1
In my upcoming blogs I am going to be analyzing yet another great tournament victory of World Champion Magnus Carlsen. What made his victory in the Gashimov Memorial even...
Posted in: Anand, Aronian, Bad Bishop, Candidates Tournament 2014, Karjakin, Khanty-Mansiysk, Kings Attack, Mamedyarov, Technique, Topalov, Zugzwang

sigrun 05:52 - 4 Apr 2014
Brilliant! I saw the Capa Lasker game on chessgames.com it was even longer than this game

@gsydonkey That's a perfectly fine option as well, called the 'Open Spanish' . It seems Wikipedia has a page about everything: http://en.wikipedia.org/wiki/Ruy_Lopez#Open_Defence:_4.Ba4_Nf6_5.0-0_Nxe4