Race your own Formula 1 car in the new racing game

Chessity has a special gift for all young Formula 1 fans: a new chess learning game in which you get to drive your own Formula 1 car. The new racing game is included in the Pawn Level (the River):

How to play the Formula 1 racing game

Each puzzle that is solved correctly earns you fuel. Fuel is indicated by the green petrol station icons, but it is also shown by the rising fuel gauge. 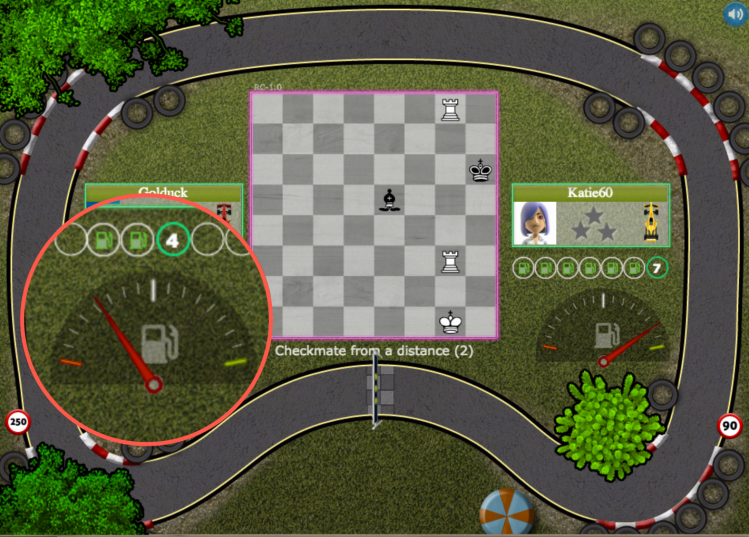 When both players have finished their chess puzzles, the racing begins! After a countdown, the cars will start automatically.

Unlike the Space Race, where the rockets move at a set speed, players can accelerate and slow down their cars in this game. It's also possible to hinder your opponent by spilling oil on the tarmac.

The more you click/tap the gas pedal, the faster you race your car. Don't overspeed trough corners, though, or you're in for a nasty surprise. And always keep an eye on the petrol gauge: high speed increases fuel consumption. If you run out of fuel, your car will explode!

When fuel is running low, the petrol gauge will first turn orange. If things get critical, it will start blinking in orange and red:

Slow down by clicking/tapping this button. Braking leaves skid marks and you hear  .

Honk your horn to warn your opponent that you want to pass his car. Honking makes overtaking easier.

On a computer keyboard, you can also use the following keys:

Gamification is an important aspect of the learning in Chessity. Playing games makes learning chess fun and students to solve more chess puzzles and learn and without even noticing. We listen to what children want and a Formula 1 racing game was high on the list!

0
Chessto keeps chess learners in the flow (Release News #4)
As a teacher your time is a precious resource. That’s why we created Chessto. In a previous blog, we described Chessto’s role as a fully adaptive virtual ches...
by JacquelineW on Oct 4, 2018

1
Celebrate achievements with Chessity's new chess diplomas (Release News #3)
Have you ever seen a child filled with joy and pride as he or she achieved a goal? Or witnessed students who were celebrated for their accomplishments? It is the pow...
Posted in: Formula 1, game, learn chess