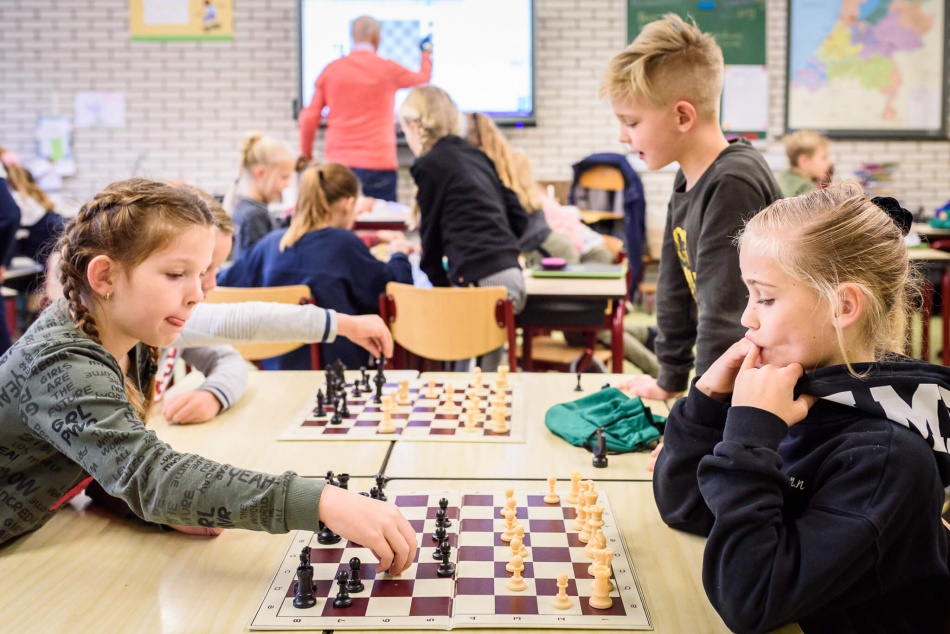 Boys are better at learning to play chess than girls… or are they?

There is no doubt that in chess, there is a gender inequality between men and women. It was the theme of the 7th London Chess and Education Conference (November 30 -1 December 2019). Chessity's CEO Janton van Apeldoorn delivered a keynote speech about gender differences in the early stages of chess: do girls and boys take a different approach to learning chess? This blog represents Janton's keynote presentation.

Chessity has student data from some 1750 schools, where chess is for everyone - boys and girls. For the London Chess Conference, we dived into the data to see if girls learn chess differently from boys. We used a dataset of 350 schools that give chess lessons on a regular basis (usually once a week). Although not scientifically grounded, this analysis yields some interesting insights.

Boys and girls are equally good at learning to play chess

In general, gender differences in learning success are small. Boys and girls perform similarly and show the same development. So the answer to the opening question of this blog is a clear 'no': boys are not better at learning to play chess than girls. 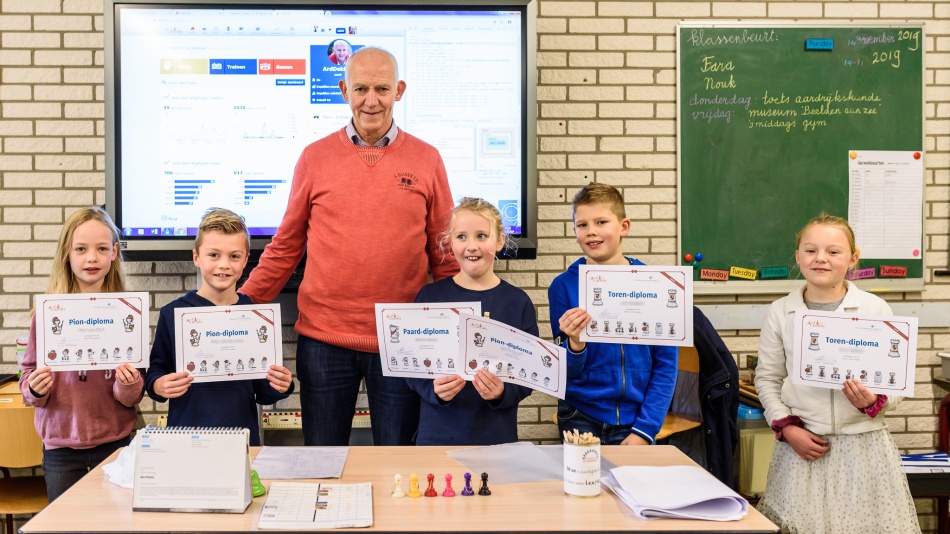 However, although the learning outcome is the same, there are notable differences in learning behaviour and learning preferences. Girls seem to work in a more disciplined manner, with steady progress, while boys are rather in inconstant in their progress.

There is also a difference in the way that boys and girls deal with new learning material. In the low levels, the majority of boys skip the instructions in the lesson text and go straight to the chess puzzles, where they learn through trial-and-error. This a perfectly acceptable approach since Chessity's AI-technology provides ample personalised instruction and feedback on the go.

Girls, on the other hand, spend significantly more time reading the lesson texts. On average, girls read twice as long as boys.

Interestingly, things change in the higher levels, where prior knowledge is required to do the exercises and solve the chess puzzles. What we see there is that both boys and girls read the instruction texts, and they do so for the same length of time. However, once they are somewhat familiar with a new concept, boys skip reading again while girls continue to read before they do the exercises.

Based on the data, we cannot draw conclusions about WHY girls approach the lessons in a different way than boys. But it seems to indicate that girls have a desire for control, perhaps out of fear of taking risks and making mistakes.

This is something that is often mentioned when it comes to the (learning) behaviour of girls (or women's careers, for that matter!). "We are raising our girls to be perfect and we are raising our boys to be brave," said Reshma Saujani, founder of Girls Who Code, in her TED-talk in 2016. "We have to socialize our girls to be comfortable with imperfection."

Competitive chess seems to be a boys' game

Although the learning games do have a 'winner' (either the child, or the robot opponent), the emphasis is not so much on winning but on performing well enough to unlock the next lesson. The robot will at best play for a gentle win if the child has not mastered the subject matter yet. If the child's chess skills are up to the required level, the robot will always let the child win.

The games in the Arena are a different matter. Playing games in the Arena - these include the tournament chess games – are not mandatory for learning progress. In other words: it is up to the child if he or she wants to play games or not.

Our analysis of the popularity of the Arena games shows a striking finding: boys and girls demonstrate different behaviour towards the various games. Girls play significantly fewer tournaments than boys and prefer the puzzles games, that are less competitive. Although boys and girls are equally good at learning to play chess, it appears that in general boys are more tempted to become 'real' chess players. 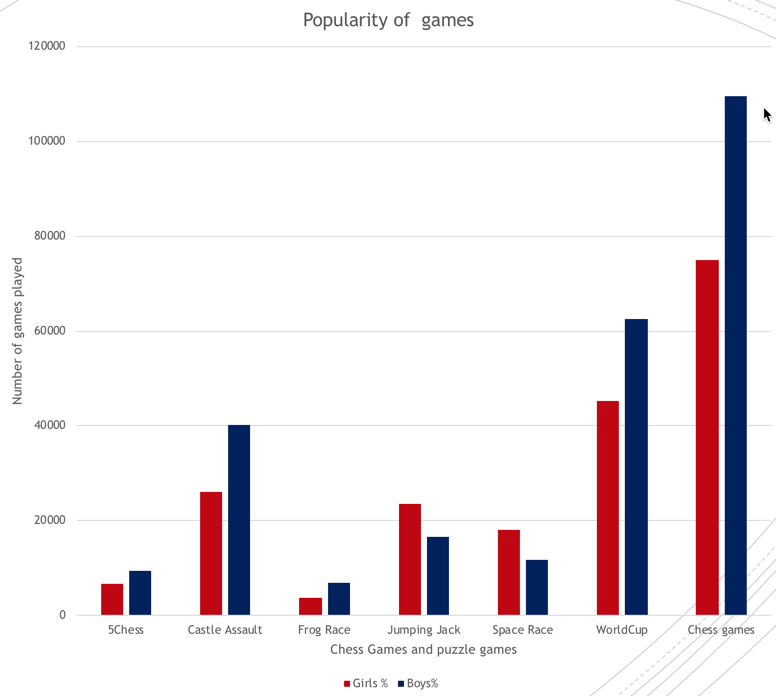 What is also striking is that the Chessity puzzle game Deep Sea World is much more popular with girls than with boys. In this game, you need to solve chess puzzles to collect scenes. With these scenes, you can build your own underwater world.

These findings correspond with gender differences in game preferences that have already been demonstrated in various studies: boys generally prefer to play games that are active and competitive, while girls prefer logic, puzzle, and skill training games and enjoy social interactions provided by games.

In our dataset of schools, there are two main categories of chess-in-school-setups. In the first, the teacher teaches chess as part of the school curriculum. The schools in the second category have a chess trainer come to teach the children during school hours.

In both categories, children - girls and boys - learn to play chess, pass exams and obtain chess diplomas. But when we look at the number of boys and girls that pass the highest exam, at King Level, we see a difference between the two types of schools. If chess is taught by a teacher, girls and boys are equal in reaching the King Level. However, if the chess lessons are given by a chess coach, the girls drop behind. 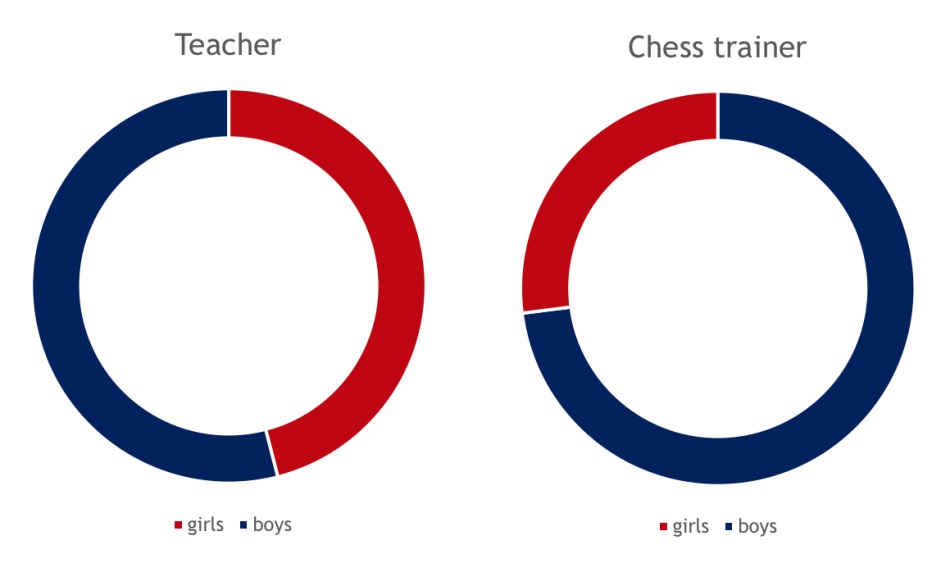 The data does not give us the answer to the 'why' behind the figures. But it does provide food for thought. The key to closing the gender gap in chess may well lay in the choices we make in teaching chess.

3
How to successfully get schools hooked on chess in just one hour
Do you want to introduce chess to your local school? Do you want children and teachers to experience how fun and easy it is to learn chess with Chessity? Or would you lik...
by JacquelineW on Jan 24, 2019