The World Championship Match 2016 between Norwegian World Champion IGM Magnus Carlsen and Russian challenger IGM Sergey Karjakin is taking on a new load of excitement. After seven rounds of fighting yet undecisive games, there came a nerve-wrecking round eight with interesting sacrifices, dubious moves, nice tactics, various facial grimaces, and also no-Magnus-show at the after-round press conference. Most importantly, the eighth round came with a decisive result giving a full point lead to the challenger IGM Sergey Karjakin. There are last four rounds to go.

The playing hall of the World Championship Match 2016 is in the Seaport District, New York City. Photo: IM Eric Rosen 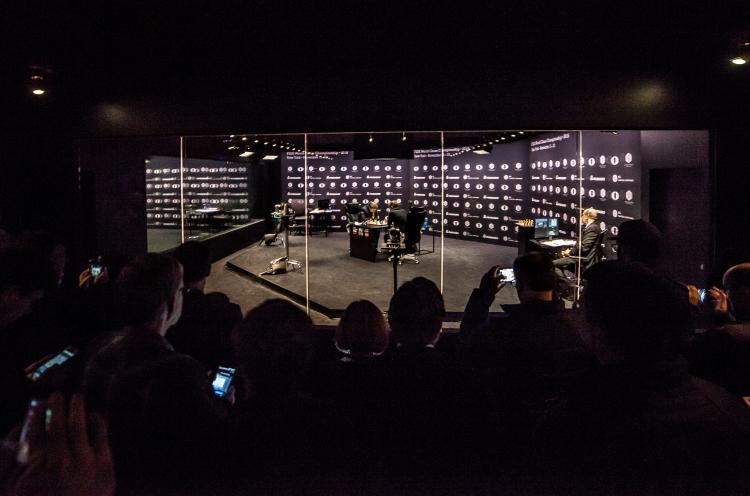 After each round, both players meet with media and spectators to give insights into the finished game and answer questions from reporters. However, Magnus decided not to wait at the press conference for Sergey who took some time before showing up, and left. Magnus now faces a fine of 10% his match prize money (60K or 40K Euro). Photo: IM Eric Rosen

Let's take a look at some of the interesting moments of game 8:

I find the result of this game extremely painful for Magnus and his fans, but the game itself is a great recognition of the bravery and fighting spirit of the World Champion Magnus. I decided to pick only 8 interesting positions from the game because I don't want to overwhelm you; however, I would encourage you to go over the whole game via game viewer where I serve additional comments. This game is truly illustrative for players who want to learn to push and play for win even when opponents try to keep the position simple and equal. 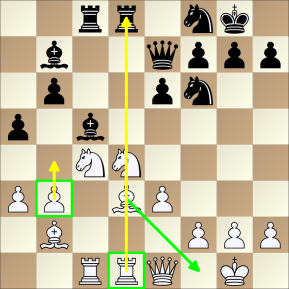 Although this position seems around equal, White aims to pressure for advantage. This interesting queen retreat allows the d3-bishop to move away and thus to give more power to the d1-rook. Additionally, the queen from e1-square provides support for a future b3-b4 advance. 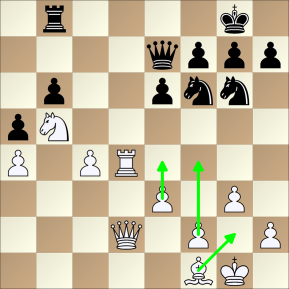 Again, this is a fairly equal position where White aims to improve his pieces, push pawns, and put pressure on Black. There would be no reason to offer a draw in such situation, there is a lot of play ahead. 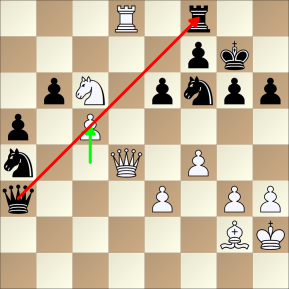 Many grandmasters criticize this move as it gives up another pawn without direct advantage. However, this move has a lot of sense too. It blocks the queen from protecting the f8-rook, forces Black to make an immediate and critical decision, and it is not easily refutable. Knowing that the position is very complicated and players had little time on their clock, I consider this as a risky yet courageous decision. 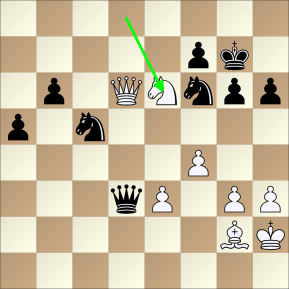 Very strong tactic that keeps the position in balance. Black cannot recapture with the c5-knight because that piece is already defending the black queen. Forced recapture with the f-pawn weakens the space around the king and invites White to attack him. 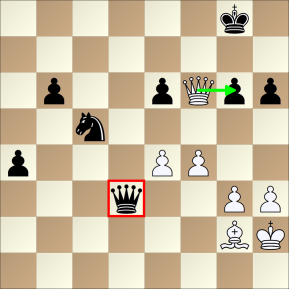 Blocking the queen from defending the g6-pawn. 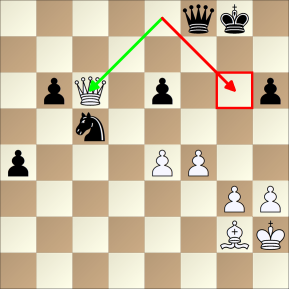 Magnus could have tried to go for a draw in this position. The game provided a lot of interesting moments for spectators and there would be nothing wrong with agreeing to a draw. However, there were already 7 draws in the match and Magnus also knew that he needs to score someday in order to defend his world champion crown. He must have felt comfortable in this position or in a fightins spirit that he wanted to continue in the game. 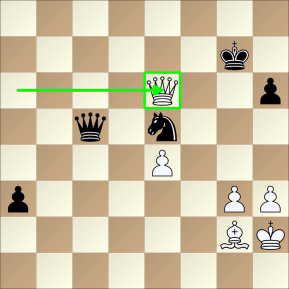 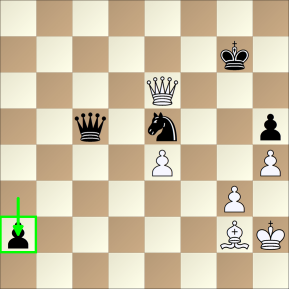 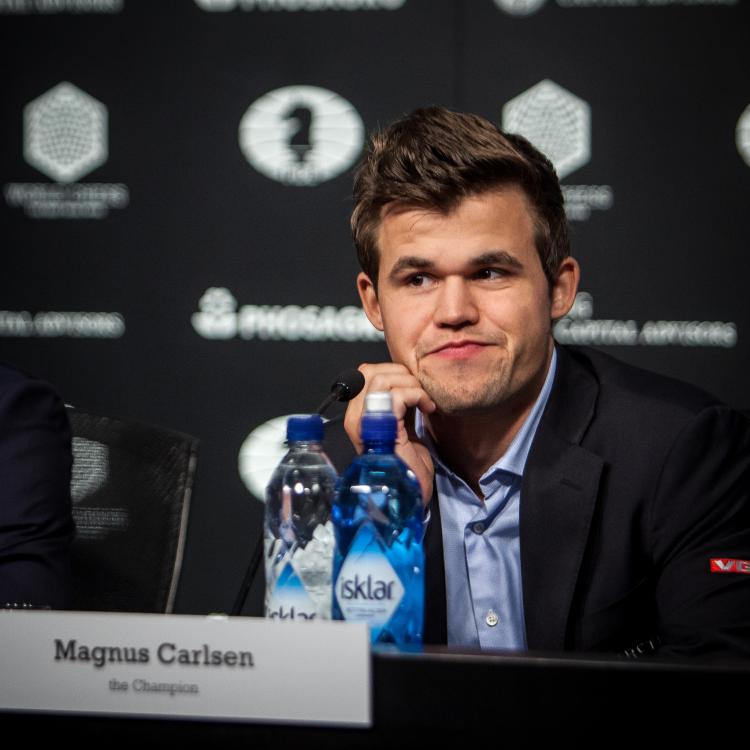 The odds to defend the World Champion title are now against IGM Magnus Carlsen. Life is tough. Let's hope he can recover and make the match exciting. Watching tie-breaks is always a lot of fun. Photo: IM Eric Rosen 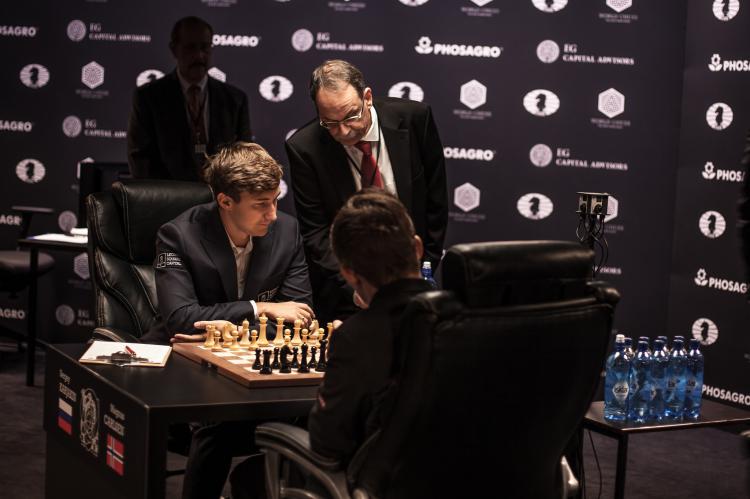 In round 9, IGM Sergey Karjakin will start off with a small advantage - he will play with White pieces for the fifth time.  Photo: IM Eric Rosen

1. Follow the World Championship Match 2016. You can watch live commentary through the official website https://worldchess.com/nyc2016/ or there are other chess websites that provide analysis and discussions. Being part of this huge event is a thing of chess culture.

2. Chess is a very rich game and even equal positions can hide treasure. Remember that some of your draw agreements can be premature.

3. A brave style of playing chess does not secure wins. Chess is tough. But don't get depressed too easily, ultimately it will improve your level of chess understanding.

2
Carlsen or Karjakin: who wins the World Championship 2016?
Yesterday I visited the Max Euwe Centre in Amsterdam in order to give a lecture on the upcoming World Championship match between Magnus Carlsen and challenger Sergey Karj...
by Katerina on Oct 29, 2016

3
4 Must Know Steps to Avoid Blundering in Chess
Blundering is painful It happens to everyone - even the best players in the world. One of the worst feelings in chess is when you make a game changing blunder and you ca...
by JacquelineW on Nov 11, 2016

2
A better Chessity to celebrate our 5th anniversary
Today is Chessity’s 5th birthday. As we mark this milestone, it’s you we want to celebrate. That’s why we have a special present for you. With our bigge...
Posted in: chess tactics, Magnus Carlsen, play for the win, Sergey Karjakin, World Championschip Match 2016

JustinSenders 13:39 - 23 Nov 2016
I don't agree with your statement that after 44 Qg6+ they would have agreed to a draw. As Karjakin mentioned in the press conference he would have gone 44... Kh8 after which the game continues. It seems to me that this is a very justifiable decision since there are zero chances of black losing that position and white has it all to do proving that the position is a draw.

Still a nice piece of analysis though!

Katerina 10:38 - 28 Nov 2016
Given Sergey's overall playing tactic in the match and the complicated position, I would expect him to agree on the move repetition. It's surprising to hear that he would continue in the game. However, thanks for the comment and the information! :) I was not able to follow the press conference so I missed his statement.