4 Must Know Steps to Avoid Blundering in Chess

It happens to everyone - even the best players in the world. One of the worst feelings in chess is when you make a game changing blunder and you can’t take it back. Thankfully, there are many approaches chess players can take to minimize the number of blunders they make during a game. Hopefully this article will help the readers to become more blunder-free!

When the World Champion Garry Kasparov sees a blunder, he can hardly hide his feelings! This situation happened at the ultimate Moves Event at the 2016 Sinquefield Cup.

First, it is important to understand the types of blunders a player can make:

Most of the critical blunders players make will fit into one of the 5 categories above. Being aware of these types of blunders is the first step to preventing them. In every move of a chess game it is necessary to “blunder check” in order to reduce such mistakes. When you make an effort to blunder check  before playing every move, it will become a natural part of your thought process. Below are several steps that many strong chess players (including myself) use to avoid making fools of ourselves…

Question: How would you respond as White? 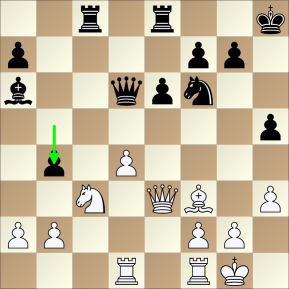 LOOK at your opponent's last move. Too many players get anxious to play their next move without even paying attention to their opponent’s last move. This is a big no-no. After your opponent plays a move, force yourself to spend at least 15-20 seconds focusing on his/her ideas rather than your own. This step is the key for chess advancement.

Answer: Black's b4-pawn directly attacks white c3-knight and thus it would be reasonable to move away with it. What else is happening in the position? Black's b5-b4 move uncovered bishop on a6 which now attacks white f1-rook. Is it possible for White to save both knight and rook in one move? Yes - the best move is Ne2! It retreats the knight and blocks bishop's attack on the rook.

Question: What is White's major threat? 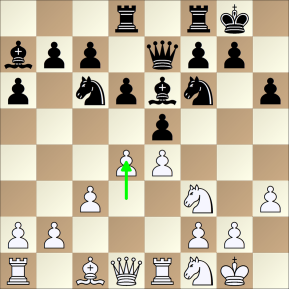 ASK yourself questions about your opponent's last move. Please let me make clear that this step DOES NOT come naturally to beginners. Players need to train themselves and acquire this habit of asking themselves questions regarding the last opponent's move. So, what questions are we talking about?

Answer: White can capture e5-pawn but that's not a threat, Black is able to recapture both with a pawn and knight. White's bigger threat is a pawn fork: move d4-d5. It will attack both e6-bishop and c6-knight, and consequently win a piece.

Question: Why is it a mistake? 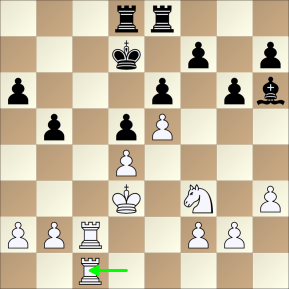 Answer: In this game, White clearly had great intentions with his move - to control the c-file and possibly to attack the black king. However, he forgot to do step #4 and thus forgot about Black's bishop on h6 that can easily capture his rook.

VISUALIZE the move before you play it.  Meaning BEFORE you touch the piece - make sure to visualize what can happen afterward.In order to avoid blundering, there is a list of basic questions that you need to respond to:

Question: Why is it a mistake? 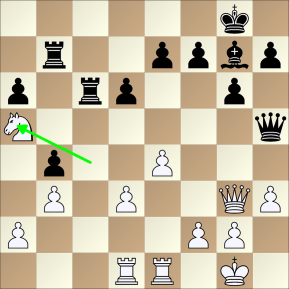 Answer: This move is also very logical - it makes a fork on Black's rook. However, one needs to visualize the move before and respond the the questions. Was White to ask question #1 (Is the square where I plan to move my piece safe?), he would quickly realize that the Black queen on the kingside controls the square from a distance.

As you can see, the first strategy in avoiding blundering consists of the awareness of your opponent’s move. I wish I could stress it more because from my coaching experience, I see that this step is truly crucial. Therefore, MAKE SURE to acknowledge your opponent's move.

Secondly, do not touch the piece you wish to play with. That may seem unreasonable, but I mean it for just a while. Try to visualize the move on the board first and respond to the basic questions. Remember, you don’t want to drop a piece on the spot. Even if you realize that your move is incorrect, if you touch the piece you are required to move it according to the FIDE touch rule.

Lastly, it is important to answer the basic questions regarding your own candidate move. I know this may be a lot of questions and a lot of hassle to keep finding responses to them move after move after move. It is tiring, difficult, and repetitive. However, it is also the way to acquire a habit of making a blunder-free move choice. It is the only road to success.

Good luck in your games!

3
It's raining chess certificates in São Paulo
After a year of hard work, students from Colégio Catamarã (São Paulo, Brazil) are awarded Chessity Certificates. Students who are in the same class r...
by JacquelineW on May 15, 2019

0
Why chess for children? This video explains it
Chess is a game that is 1.400 years old. How come that today it is regarded as an important educational activity? The European Chess Union answers this que...
Posted in: avoid blundering, blunder, checklist, chess, visualization

jaycdp2018 20:53 - 25 Sep 2021
Do not go for an attack before looking into counter attack
look for pin
look for fork
look for discovered attack
see if your opponent aggressively attacking your king or other pieces.
some people just want to attack your king from the beginning and you forget to keep track while planning other thing