Lessons to be learned from Tata Steel Chess (Part 2)

Beginners at chess often think that grandmasters are infallible. But they are not. Even grandmasters of chess make mistakes. Even the world champion can miss the winning move. If there is one thing to be learned from the last seven rounds of the Tata Steel Chess Tournament 2017, it is that making mistakes is part of the game.

In the blog post about the first six rounds of the prestigious tournament in Wijk Zee, we left off with Wesley So in the lead in the Master Group and Markus Ragger and Gawain Jones sharing the first position in the Challenger Group. Seven rounds later, the situation was the same. Wesley So became the winner of the 79th Tata Steel Chess Tournament. Jones won the Challenger Group. Both he and finished at 9 points, but Jones' victory over  (see blog) earned him first place. In next year's tournament, he will play in the elite group.

Round 7 was probably the decisive round of the tournament. In this round, Pavel Eljanov spoiled a winning position against leader Wesley So. Carlsen missed a simple winning move: 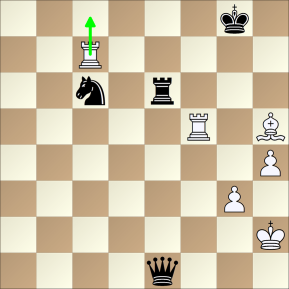 Carlsen checked the king with his bishop and threatened the rook at the same time: a double attack. He had planned this move way in advance and did not take the time to consider other possible moves when it was his turn. It took him only a few seconds to move his bishop! Had he taken more time to think, he would surely have spotted the stronger continuation: by checking the king with the rook (see green arrow), White forces the black king to step forward. 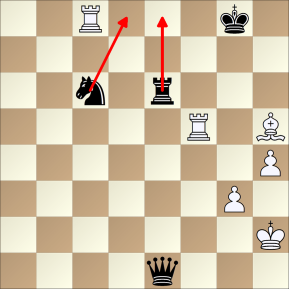 Black would rather not interpose his knight or rook. White can take and Black with the same problem again: how to get out of check. Let's suppose Black places his between his king and White's rook. White's rook will capture the black rook, which this is the position: 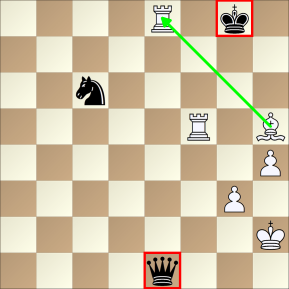 A double attack on king and queen! Black could take the rook with his queen, but White's bishop would recapture. White would have the material advantage of a rook and two pawns!

Back to the first move: 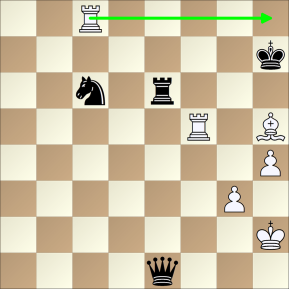 Once the Black king is forced to step forward, it is time for the other white rook to help. Do you remember the Lawn Mower Mate I discussed in my previous blog post? If Carlsen had only read that! With the 8th row guarded by a , it is time to take control of the 7th row with the other rook. It checks the king: 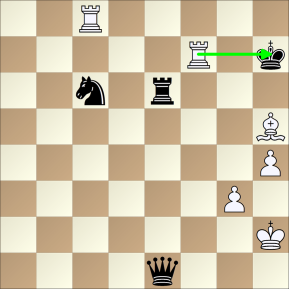 The black king has to step forward again and White can checkmate. Do you see how? 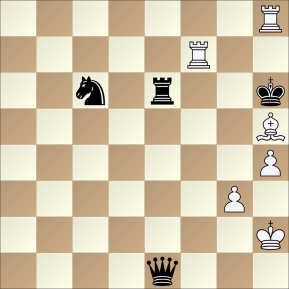 Well done! The rook on rank 8 checks the king and creates for the bishop. Checkmate!

An interesting detail is that during the World Champion Match, Carlsen did manage to spot a similar mating plan. In the decisive game for the title, he sacrificed his queen (for Dutch readers, see: Wat van Magnus ).

It is very rare for a top chess player to miss a simple winning move (read Blunders door  (Dutch)). So it is special when it happens. But it is a really unique situation when two grandmasters miss a win in the same round of a chess tournament.

Grandmaster games usually take long and are decided in the middle game or endgame. However, in his game against Levon Aronian, Sergey had the to win a piece in move 10! The children participating in Chessity's commentary for kids during the Kids Weekend of Tata Steel easily spotted this opportunity. But Karjakin missed it! 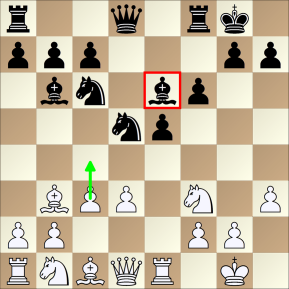 Black has played the pawn that stood between his king and his bishop. This leaves the bishop undefended. Fortunately, White cannot immediately take the bishop. That's why White moves up the pawn in front of the queen. If Black takes it with his own pawn, White's rook can capture the bishop. Black's pawn is pinned. It is not obliged to capture the pawn, so the game is still wide open.

White could have benefited from the undefended bishop in another way. How? By pushing another pawn (green arrow). This pawn threatens the knight. If the knight flees, it becomes clear why this is a smart move: 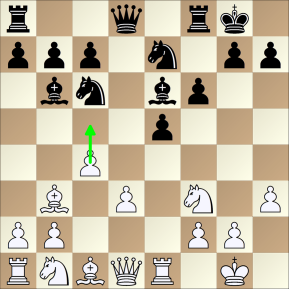 With the knight gone, White can attack the light-squared bishop by moving up the pawn once more: 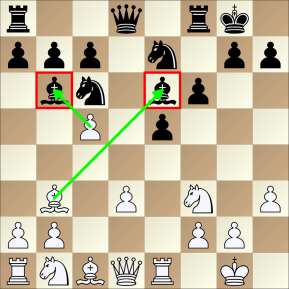 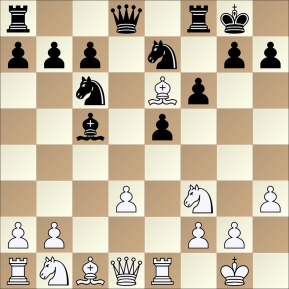 Black could choose to take the white bishop now and capture the pawn the next move. But that won't work. White will take back with the queen, checking the black king: 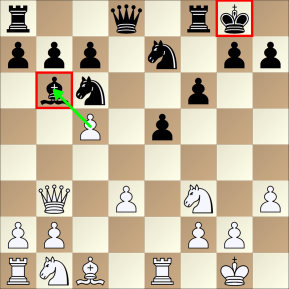 Black has to get out of check and White's pawn takes the bishop.

In round 8, Carlsen suffered a surprising loss to Hungarian Richard Rapport. Maybe he was still lamenting his missed chances in the previous game and got distracted. Rapport ended but did play a crucial part in So's overall victory. He lost a won position in his game against So (read Lessons to be learned from Tata Steel Chess (Part 1)), but managed to win against Carlsen.

Wesley So had a series of four but stayed in the lead. By winning in round 10, he opened up a 1-point gap on the field. Have a look at his game against Radoslaw Wojtaszek from Poland: 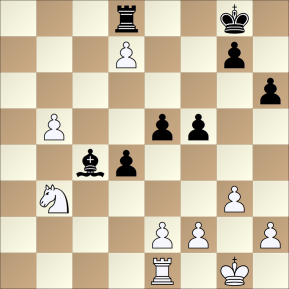 The bishop threatens the knight, but that does not worry So. On the contrary, he decides to attack the bishop with his rook, almost forcing the knight to capture: 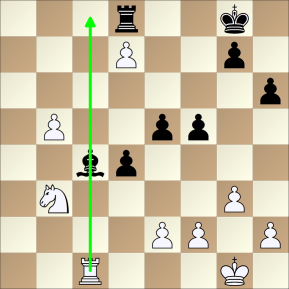 Why's that? Look at White's passed pawn on the 7th rank. So wants this pawn to reach the other side of the board for promotion. This is more important that fretting over his knight. If Black takes the knight, the White rook comes to the aid of the pawn: 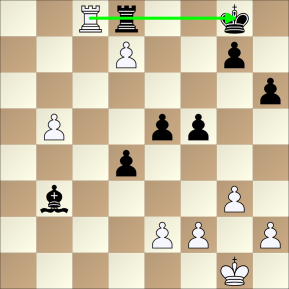 Black's rook cannot take the pawn, for that would put his king in check. White has pinned the rook to the king! If the rook takes the White rook, the pawn will take back and promote to a queen at the same time! Black cannot defend his rook and will lose it.

That's why Wojtaszek chose to retreat his bishop. In doing so, he created an x-ray defense of the square on the 8th row that the White rook is eyeing. 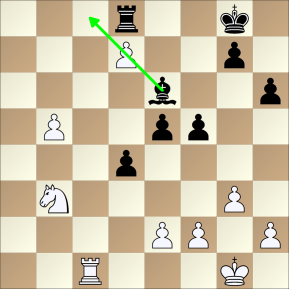 Surprise! So moved his rook there anyway: 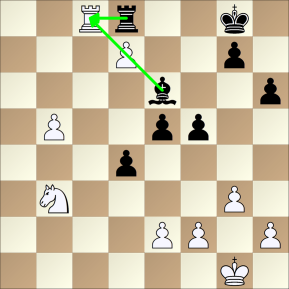 The rook has one defender and two attackers. Black took first the rook and then the pawn. He gained 1 point and got rid of the nasty passed pawn. Did So make a mistake? 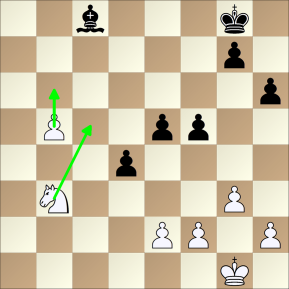 Nope. It's all part of his plan! You see, White has another passed pawn that he can use. He moved this pawn and Black resigned. Do you see what will happen in the next moves? The White knight will join the pawn (green arrow). Black will lose his bishop to a pawn. White will be a knight up and that secures the win for chess players at this level!

Round 11 put the excitement back in the tournament. 17-year old Wei Yi from China, up fast, won his game and moved into  half a point behind Wesley So, whom he played in the next round. This game ended in a draw. So went into the final round only half a point in the lead, with a chasing group in which was joined by Levon Aronian and Magnus.

At the start of round 13, four players could still win the tournament. But So easily won his final round game against Ian Nepomniachtchi and secured the Tata Steel Chess 2017 title. Both Wei Yi and Aronian lost their game. drew against Karjakin.

This is the final ranking:

Wesley So is now the third strongest chess player in the world. He has an unbeaten string of 56 games and won top tournaments in Saint Louis, London, as well as the chess Olympiad in Baku as part of the American team. In this video, So talks about his tournament in Wijk Zee, 2017:

After round 8, and Jones were still tied first, but 16-year old American Jeffery Xiong proofed unstoppable. He surprised Gawain Jones in round 9, placing him third, only half a point behind Markus Ragger and Ilia (who overtook ). Here are some interesting game fragments: 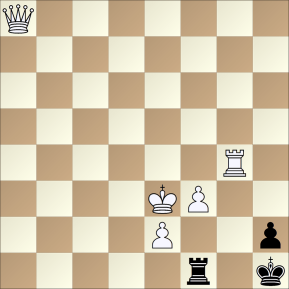 Things look gloomy for Black. White is a queen and a pawn and the Black king can't move anywhere. But wait! If Black can manage to lose his rook, the king is stalemated! Unfortunately for Jones, there is no good way to sacrifice the rook. Of course, Jones realizes this. He sportingly allows Xiong to checkmate him. The black rook takes the white pawn, 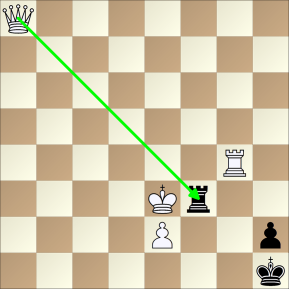 and Xiong's queen takes the rook. Checkmate! Note: taking the rook with the pawn would have created a stalemate : 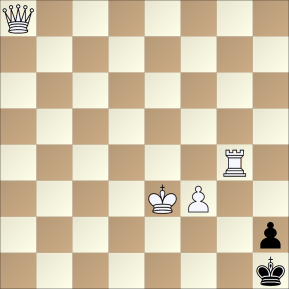 Stalemate traps come in handy as a method to draw the game in a losing position. When the board is nearly empty, can be a great way to escape a loss. Getting half a point is a lot better than losing! You can learn how to that in the lessons about this topic in the Knight Level. Jones tried to get his king stalemated but did not succeed. Earlier in the game, it might have worked. 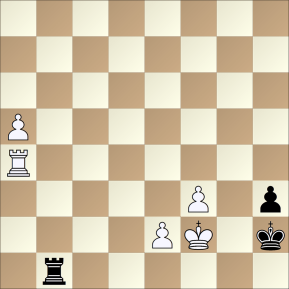 Even when your king still has freedom of action, you can use a stalemate trap (see the lesson Stalemate traps (2), Knight Level). This is pretty to hard spot, even for a grandmaster! Black could have moved the rook to the left corner: 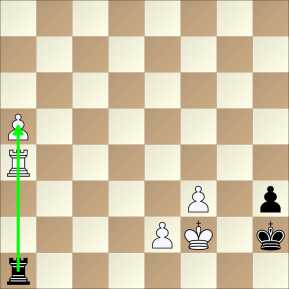 If white takes, it is a stalemate situation. And if White's rook moves away, Black can capture an important pawn!

Xiong won again in round 10 and joined and Smirin in the lead. In round 11, he defeated his co-leader Smirin. drew in this round, making Xiong the favorite for the title! Jones won and climbed to second place. This is his winning game: 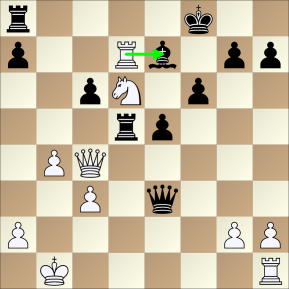 Jones sacrifices his rook by taking the bishop. 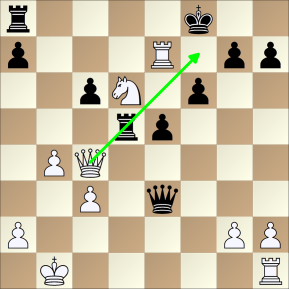 The idea is to seduce the king into taking the rook, 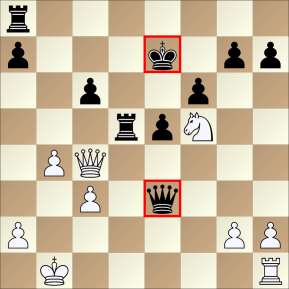 for this creates the opportunity a double attack on king and queen. A knight fork!

Another important aspect of the position (second diagram) is this one: Black's rook cannot take the knight because it is pinned to a mating square. If the rook takes the knight, White's queen gives checkmate by following the green arrow. 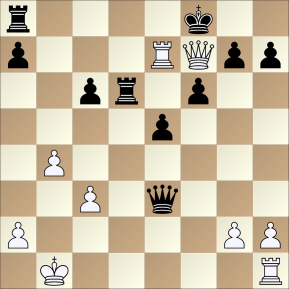 Mate from close by!

Dobrov captured none of the white but used his other rook (the one in the top left corner) to attack the knight twice. White's rook checked the king and the black king stepped aside. Now, this was the position: 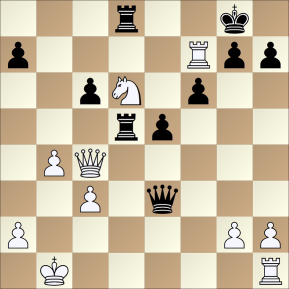 White used the same trick again. He sacrificed his rook by taking a pawn and thus checking the king: 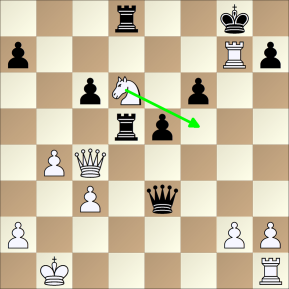 If the king captures the rook, White can once more create a knight fork (green arrow). That's why the Black king fled to the corner. White now used his rook to threaten the queen: 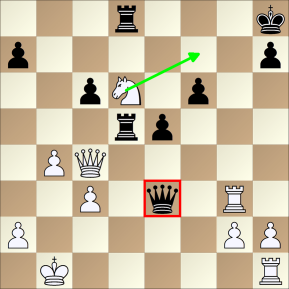 Not only should Black defend his queen, there is also a mating threat (green arrow). A double attack on a piece and a mating square! Black resigned.

In round 12, Xiong couldn't pull a stunt and lost. Jones and  won their games, putting them both back in the lead. In the final round, both leaders drew. Smirin and Xiong did not manage to win to force tiebreaks.

The final ranking of the Challenger Group:

Both groups of the tournament had a very exciting conclusion. The Tata Steel Chess Tournament 2017 was a great event for chess lovers! This year's edition paid a lot of attention to children, to which Chessity - as an official partner of the tournament - happily contributed. Kids are important to the future of chess

Next year will bring Tata Steel Chess' 80th edition. You can jot down January 2018 in your agenda for a lot of fun chess activities, for this anniversary edition promises to be a very special one! If you want to stay in Tata Steel Chess mood, you should watch the entertaining video's made by the tournament's press team (check out their YouTube channel for more):