Chessity-founder Janton van Apeldoorn often describes the 'Chessity-project' as an organic process, where bits and pieces are being added on a daily basis. This is indeed what is happening as we speak, and in this blog post I want to give you a little update on the work that's been done!

The partnership with the Dutch Chess Federation means that your favourite gateway for chess improvement will soon be flooded by chesshungry kids! Via Chessity they will quickly get acquainted with the rules of the game and hopefully find their way up the ladder!

In the coming weeks little introduction video's will be added to the various lessons, by which we hope to make the training-experience even more smooth.

Contributors Robert Ris, Alina l'Ami and yours truly have been continuously adding excercises to the 'general pool'. We dislike 'computer-excercises' and therefor handpick/carve all of them ourselves. That indeed requires some serious labour but I do believe the results speak for themselves.

Statistically speaking a game of chess is usually decided by tactics. We blunder a piece, overlook a back-rank mate or actually fork the opponent ourselves! We aim at make you discover these tactics not only by 'seeing' or 'calculating' the solution, but by training your intuition and ability to recognize key patterns. 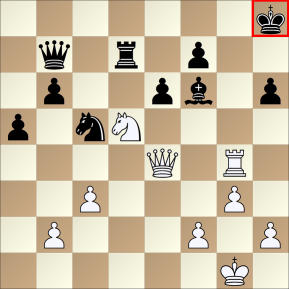 White is to move here and I am not saying this to brag, but it took me a mere second to solve this position. Why? Because the pattern we are about to see is one I have seen countless times before. A simple case of pattern recognition, there is nothing magic to it!

Your first instinct may tell you to play 1.Nxf6, not only taking a bishop but also threatening the rook on d7 and threatening mate on g8. For instance 1...Nxe4? would be answered with 2.Rg8 mate. However, the defensive resource 1...Rd1+! saves the day as 2.Kg2 Qxe4+! exchanges queens (with check!) and forces white to give up on any mating ideas. An idea of Janton's is the importance of the so called 'forcing moves'. These are moves to which your opponent is forced to react (for instance a check, or a capture). As the saying goes; always give check... it might be mate! In the above position it is a forcing move that decides the issue. With 1.Qh7+! 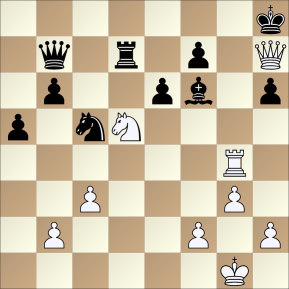 Black's king is forced to a bad square and after 1...Kxh7 2.Nxf6+! we see why that's important. The knight takes on f6 with a check forcing 2...Kh8 when 3.Rg8+ is check and mate. In general it's a very good strategy to start your calculations by looking at the forcing moves. I would also definitely recommend you to try out the related material under the training tab!

Look at the following video in which both players have just 1 minute on the clock to play the entire game:

I expect most of you could barely grasp what was going on in this game. They were simply moving too fast! What we see is that this game is played purely by intuition and what is often described as 'feeling'. Pattern recognition plays a huge role here of course. Both these players have spend countless hours sharpening their game resulting in the fact that they can still play very decent chess, despite having just 1 minute to complete the game!

Getting more experienced in playing the game of games, you too will acquire a 'feel' for the game. For instance, a beginner will look at the position below and most probably will not be able to see further then that it is possible to take the rook on d1. 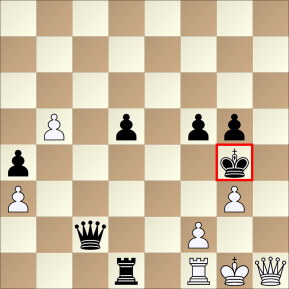 A more experienced eye will sense there is something very wrong with the black king on g4. To say his majesty is overextended there, would be quite the understatement. Note that we have not solved this excercise yet, but by determining what we feel is the key feature to this position we now have a clear direction in front of us! 1.f3+ Kxg3 doesn't bring us anywhere. In fact, given the rook is pinned on f1, black now threatens mate in 1 with Qf2+! (true Qc5 also does the job but there should be room for esthatics in chess!) Instead 1.Kg2! 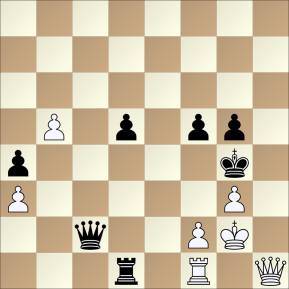 does the job. The threat is to give mate with Qh3 next move. Playing this move does mean you have to see the forced sequence 1...Qe4+ 2.f3+ Qxf3+ 3.Rxf3 Rxh1 4.Kxh1 Kxf3 and with the dust cleared it suddenly transpires that the simple 5.b6 ensures white another queen and the game. Certainly not easy but where would be the fun in that? Note that, at the risk of repeating myself, solving get's a lot easier when you recognize key features in the position. I'm convinced that both Hikaru Nakamura and Maxim Dlugy (the players in the featured video) would spot the solution with lightning speed!

While most games are indeed decided in a tactical way, there is also that area of the game where tactics play a very limited role. At Chessity we have been trying to adress that part of the game which is best described as 'strategy'. An extensive Endgame-section has been completed and get's updated constantly. In the general pool of excercises there are now plenty of positions where the target is not to execute a tactic but rather to win the game by 'normal' means. An example: 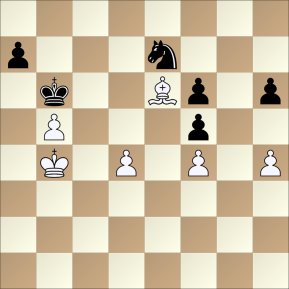 White is obviously pressing here with his passed d-pawn and strong bishop but the immediate 1.d5? allows 1...Ng6 when the game is open again. The position therefor requires some prophylactic measures! With 1.h5! 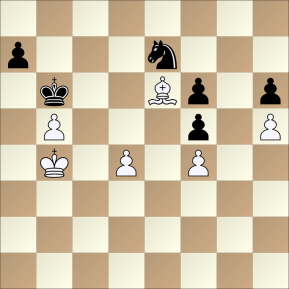 White ensures that the knight is stuck on e7 and has no place to run. That leases only king moves as 1... a6 2.bxa6 Kxa6 3.Kc5 followed by 4.Kd6 just picks up the knight. After the further 1...Kc7 2.Kc5 black is in a bad way. Moving the king would allow the white king to enter even further while 2...Nc8 3.Bxc8 results in a pawn-endgame that is easily winning for white. Did you like that we solved this position without any trickery? If it is not clear to you just why white should be winning this pawnendgame, have a look at Robert Ris' excellent pawn-endgame training!

I'd like to finish this blog post with a position that I found quite fascinating and a perfect example of what I mentioned earlier: look at the forcing moves first! 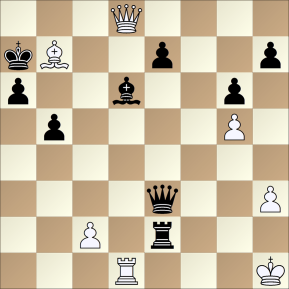 Do play through the above position on the widget where you also get to solve two more positions on your own! I hope to have given you an idea of what we are doing here at Chessity and how we envision chess improvement should look like.

Do not be be shy to give us some feedback! We like that :)

wbrederode 19:54 - 7 Jun 2015
Erwin,very instructive material Thanks for your sharing your skils Willem Brederode

holze003 08:17 - 27 Jun 2015
Congratulations on your excellent educative work that leaves also the "older " chessfan with a lot of divertion!
Playing tactics on the Gameknot site as well, I can confirm that the human -made puzzles are indeed closer to real positions than the computer´s!
And so will contribute surely to a better performance over the board.
Cheers, Holze003