5 Jobs Pawns Are Awesome At

Ever wonder how pawns feel in a chess game? They are small, common, and unable to move backwards. The term special is hardly the proper description, not at least in the good sense. Valuable?! All beginners are taught that each pawn is worth one point and if you lose a couple of them, “don’t worry, it’s not a big deal”. Aspiring?! Maybe. A pawn’s major objective is to run to the other end of the board and promote into a queen. Truth to be told, not many of them make it that far ‐ probably less than 2%.

If pawns are not significant, why to bother about them at all?

Because it’s not true what's gossiped about them; they can be significant. Context matters. Pawns can be special, valuable, and aspiring. It’s just up to each player to give them a chance to impress.

What are the jobs pawns are awesome at? Besides the obvious such as attacking/capturing opponent’s pieces, assisting during checkmate, and promoting into a queen, 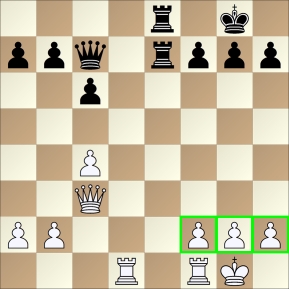 Pawns take an important role when they stand in front of their king.

One of them (usually h-pawn) can move one square up to  avoid back-rank checkmate and give a king some hidding space , or to control g4-square (rsp. g5-square for Black) and avoid checkmates on h2 (rsp. h7). Other than that, they usually want to stay neatly next to each other protecting the king.

#2 Defending their own pieces. 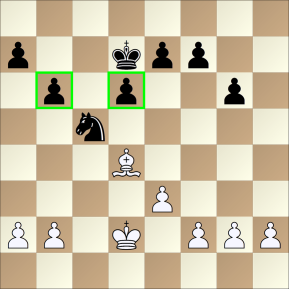 See how the black knight is unafraid in front of the white bishop? That's because of his pawns. Pawns allow their teammates to go forward while covering their back.

#3 Controlling key squares, especially those in the center. 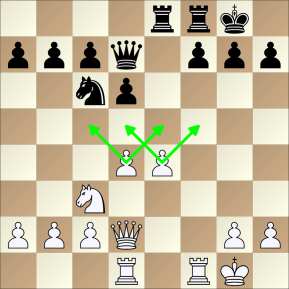 Pawns have an important quality of controlling squares. Meaning: opponent's pieces cannot occupy those controlled squares otherwise they would be captured by the pawns. The control of squares, such as the central squares, leads into spacial advantage and more developmental or attacking chances. Less control of key squares leads into a crumbled position and inability to develop pieces well. 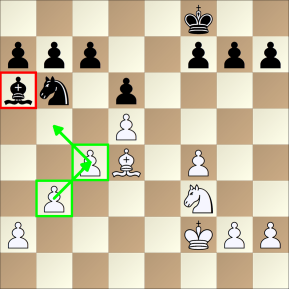 Similarly to the ability of controlling important squares, pawns can also restrict active movements of opponent's pieces. On this diagram we see that the black bishop in the left corner faces a very tough time. There is no square to move to! It's almost like White is playing with an extra piece now. 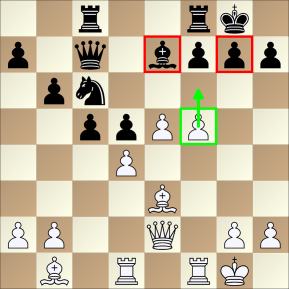 Summary: Pawns have far more uses than simply trying to promote into a queen. They can play key roles in your games! All you need to do is hire them for their dream job.

1. Make sure your students appreciate pawns. Each pawn matters and losing one "is not okay". It's not the end of the world either, but they need to develop a sound understanding of a pawn's importance.

2. Introduce a "pawn game" into your practice. Set up all pawns on their initial squares and put all other pieces off the board. The ultimate goal of the game is to promote of the pawns into a queen. A player who does so wins the game. Through this games players develop certain skills that will be valuable not only for endgames, but also for the averal understanding of pawns' power. (You can modify the game by allowing kings on the board.)

3. Point out to these pawns' tasks when analysing a game or an opening. More often you acknowledge them, more likely your students will remember & use that knowledge. Repetition matters! :)

Katerina 18:18 - 26 May 2016
You're on the perfect website to learn how to play! Go to "learning" bar on the top of the page and the complete the assignments one after another... After you do so, you will have sufficient knowledge to play are real game.